Panzerfux offers one of the worlds largest ranges of military kits in the scale 1/87. Additionally we have many other kits from other brands in different scales. We sell them to you via our web store. You may order by telephone, fax, E-mail or letter as well.
We proceed your order as fast as possible. So it may take just 2 days within Germany from pressing the "send" button of your order until the delivery driver rings your door bell. It may take up to 10 days for world wide shipping.
All the time we are looking for new items to offer and for you to built. At that we encourage our suppliers to make what ever new item you like to have. Furthermore we hand over all your feedback to the manufacturers.

It was in the year 2001 when I was looking for training stuff. I had to hold a tactical tuition. It was one of there Sandkastenausbildung  before soldiers deploy first time with their tanks. I was disappointed about the officially supplied items which have been red and blue building blocks. So I started to look for suitable model kits. I assumed that the scale 1/87 may fit or a smaller one. But I noticed that no such models were available. Only some in 1/87. So I took 1/87 scale kits and kept them in my office. Then I had the idea to use original German Army tank paint to paint the new models. Although all the details were ruined by the paint, the soldiers asked for buying the tanks.

If someone is interested in such rude models, how would it be if I would spend more effort on the kits. For testing, I just bought one Leopard 1 from Roco Minitanks for 7 Deutsche Mark. I borrowed my friends airbrush equipment and put the ready made item on ebay. Actually I got more than my money back and the idea was born.

First, the tanks have been sold at ebay but I liked to get rid of ebays fees. So a first panzerfux website was installed in 2002. It was just a list with some vague photos of my models. As more and more orders came in, we decided to make an own shop which was opened in 2005. The new opportunities allowed us to offer kits and ready made items simultaneously. During more and more items came into our shop it was getting harder and harder to keep the shop up to date. First we had just 300, then 500 and later more than 1000 items. Delays have been the result of that. 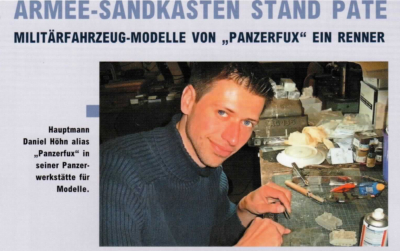 Meanwhile our  Panzerfux Catalog  with more than 100 pages was published.
2011 we had over 3000 different items in stock. This was the time when we switched to a dynamic shop system which is related to our stock. The update made it much easier for our customers and us.

Now we have more than 4500 items online. 3500 are in scale 1/87. Four hardworking employees and I take care to answer your orders and requests as soon as possible. Meanwhile, we are about 10.000 items.

We use cookies on our website. On the one hand, these are due to technical reasons, for example, to be able to use the shopping cart. Others are used to create anonymous statistics or to improve the personal shopping experience. Further information can be found in our data protection information .